Hiking The Path of the Gods (Sentiero degli Dei)

“Unparalled views of the Amalfi coastline, Positano and the cliffs that make this one of the most beautiful places on earth."

The Path of the Gods or Il Sentiero degli Dei in Italian is an amazing hike along the cliffs of the Amalfi Coast from Bomerano to Nocelle. Nocelle sits up above Positano and Arienzo and from it you can make your way down to these coastal towns either by continuing the hike or taking a bus from Nocelle to Positano.

It takes roughly 3 to 5 hours to hike the main four mile section of the trail from Bomerano to Nocelle, depending on your fitness level. The path is not difficult, and is well marked, but it can be tiring as it gets hot during the summer and does have elevation changes to deal with as it goes up and down hugging the side of the cliffs.

If you are wanting to finish your hike in Positano, instead of Nocelle, you can take the stairs down from Nocelle to Arienzo below. From there it is about a 15 minute walk along the coastal road into Positano. It should be noted that there are about 1700 stairs to descend from Nocelle to Arienzo which can be challenging especially on your knees and feet.

You would think that the The Path of the Gods gets it name from the incredible views of the Amalfi Coast below but it actually gets its name from the legend that the path was the passage the Greek Gods took to save Ulysses from the sirens that were on the islands of Li Galli who tried to shipwreck him. He calls upon the Gods that come down from the mountains to save him.

Hiking The Path of the Gods

The Path of the Gods in Pictures 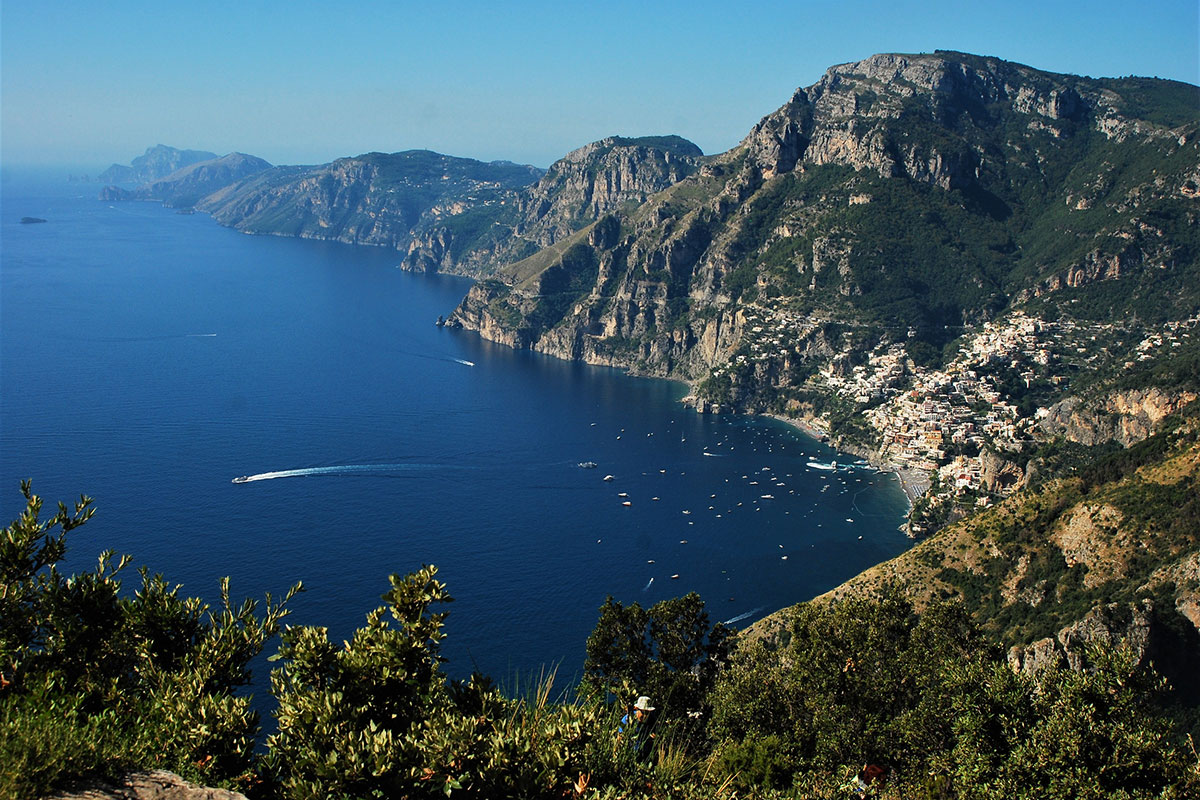 View of Amalfi Coastline & Positano from The Path of the Gods 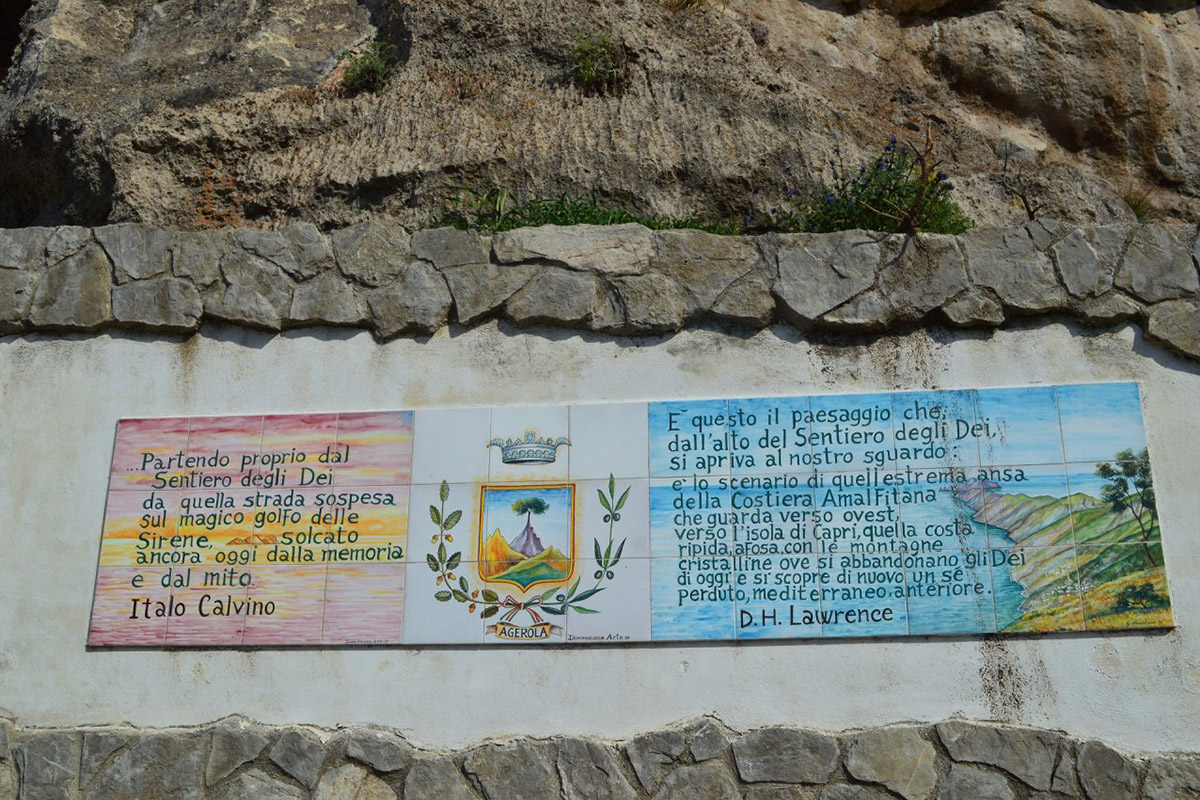 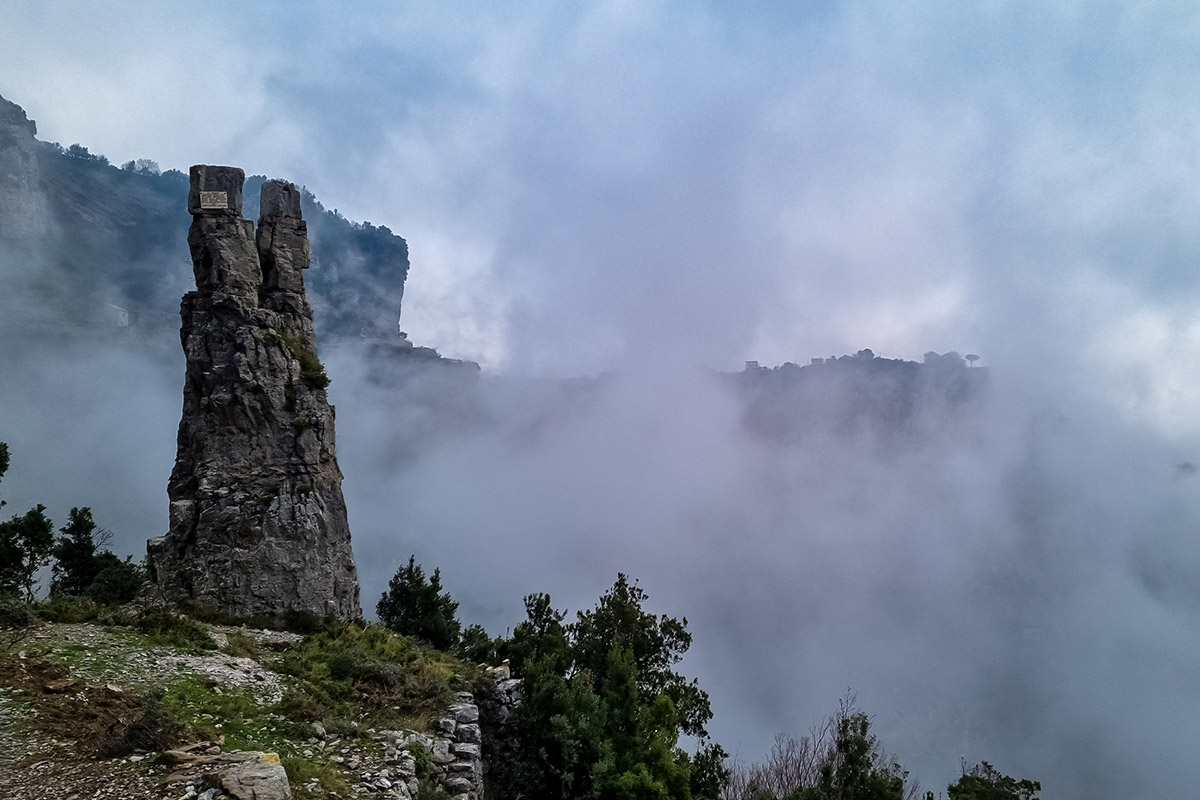 Interesting Pinnacle Rock Formation on Path of the Gods 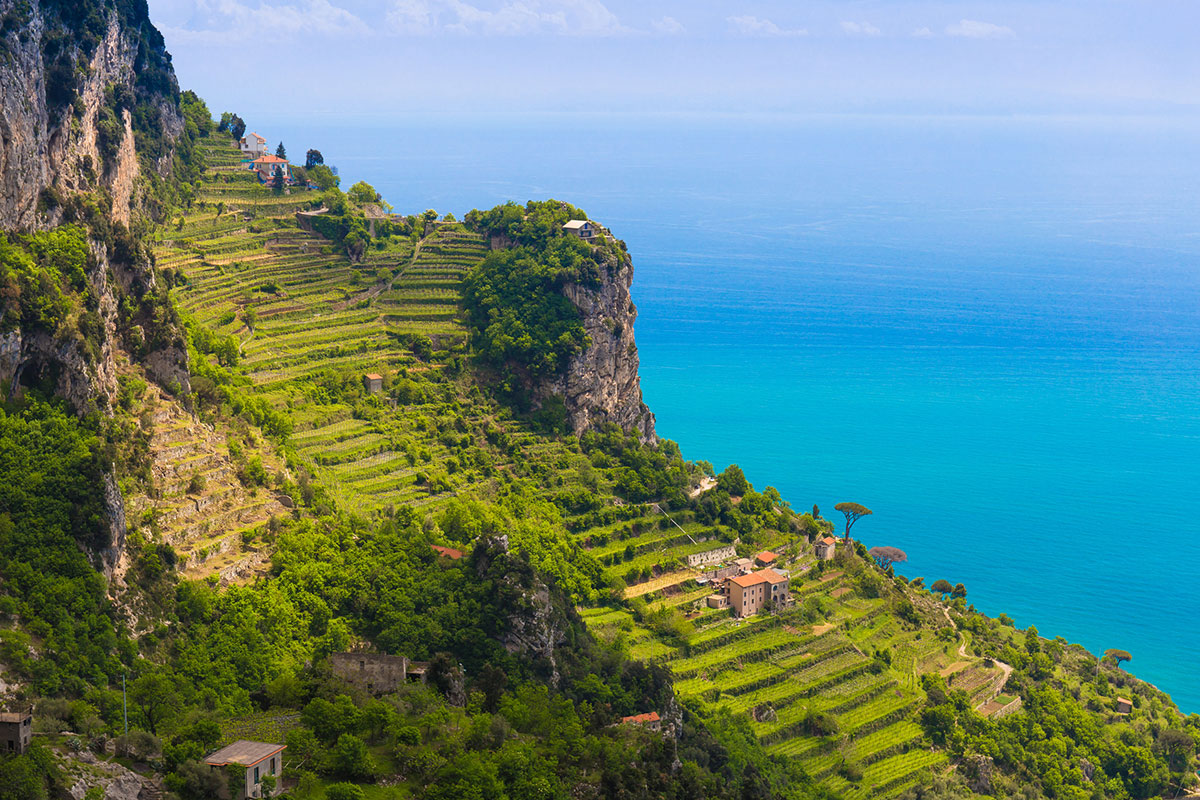 Terrace lemon fields as seen from the path of the gods 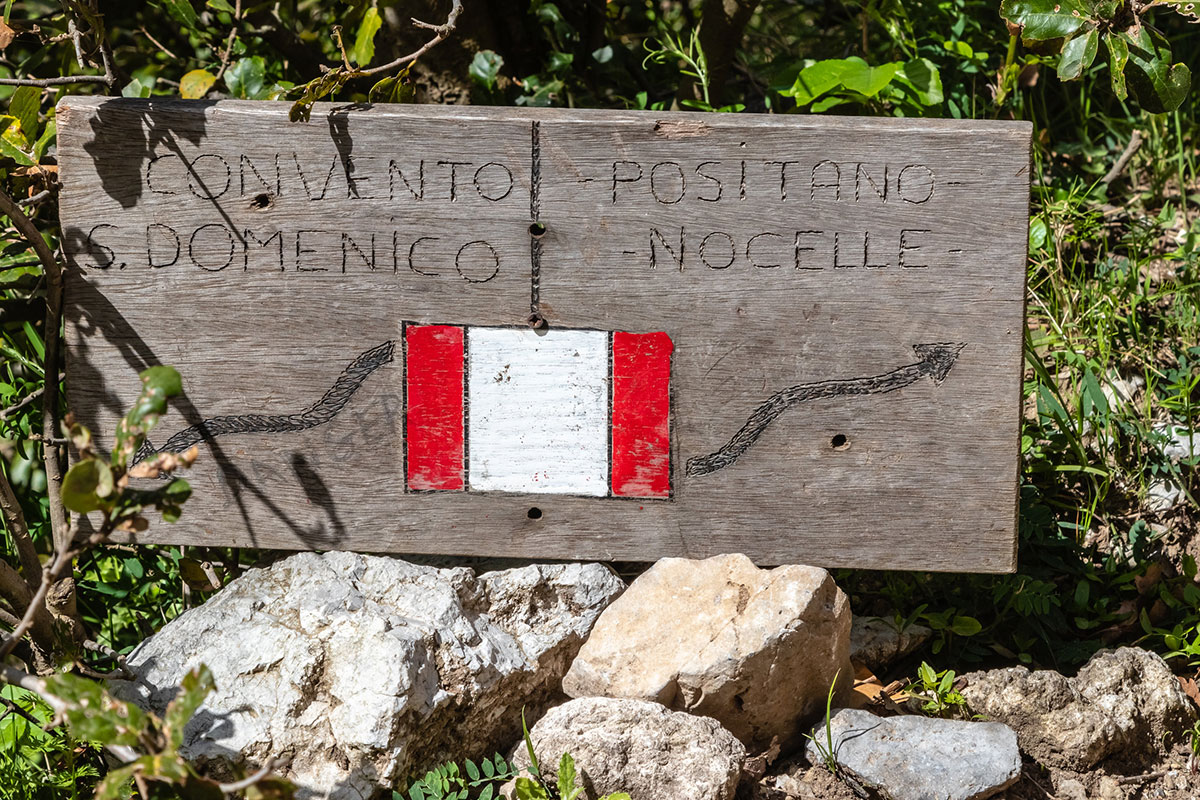 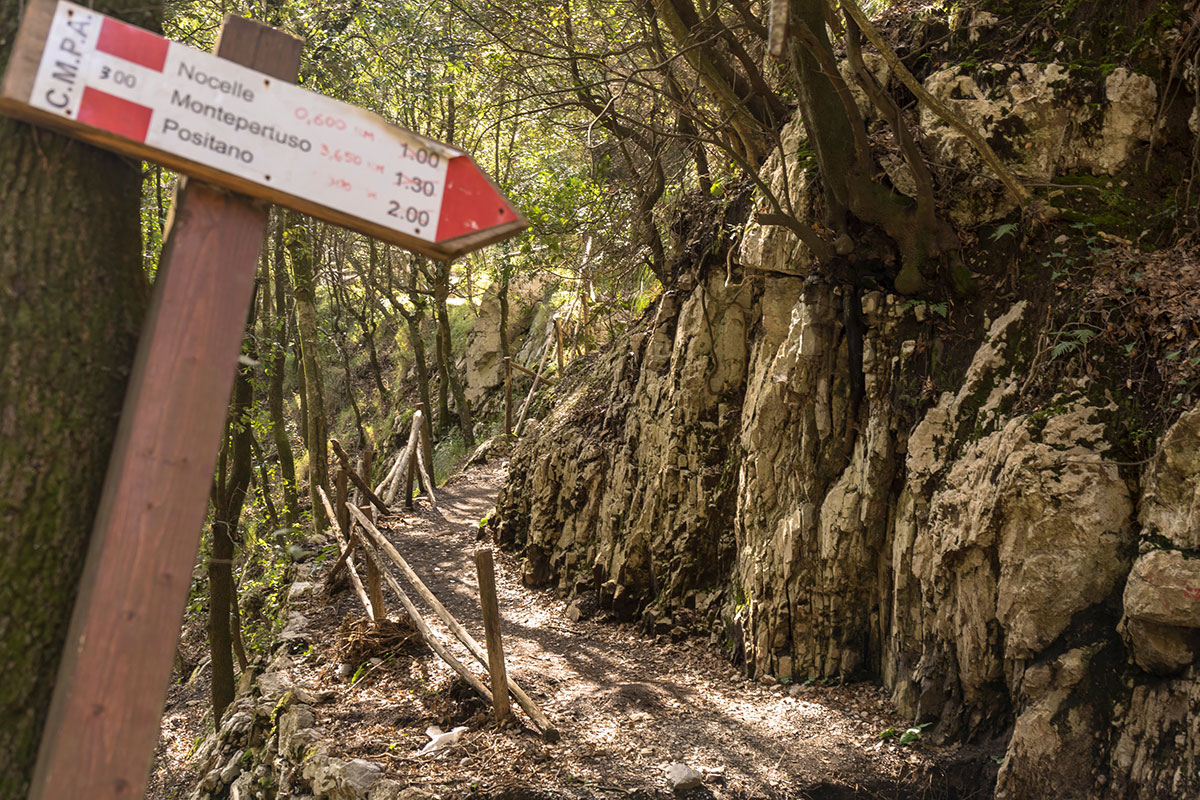 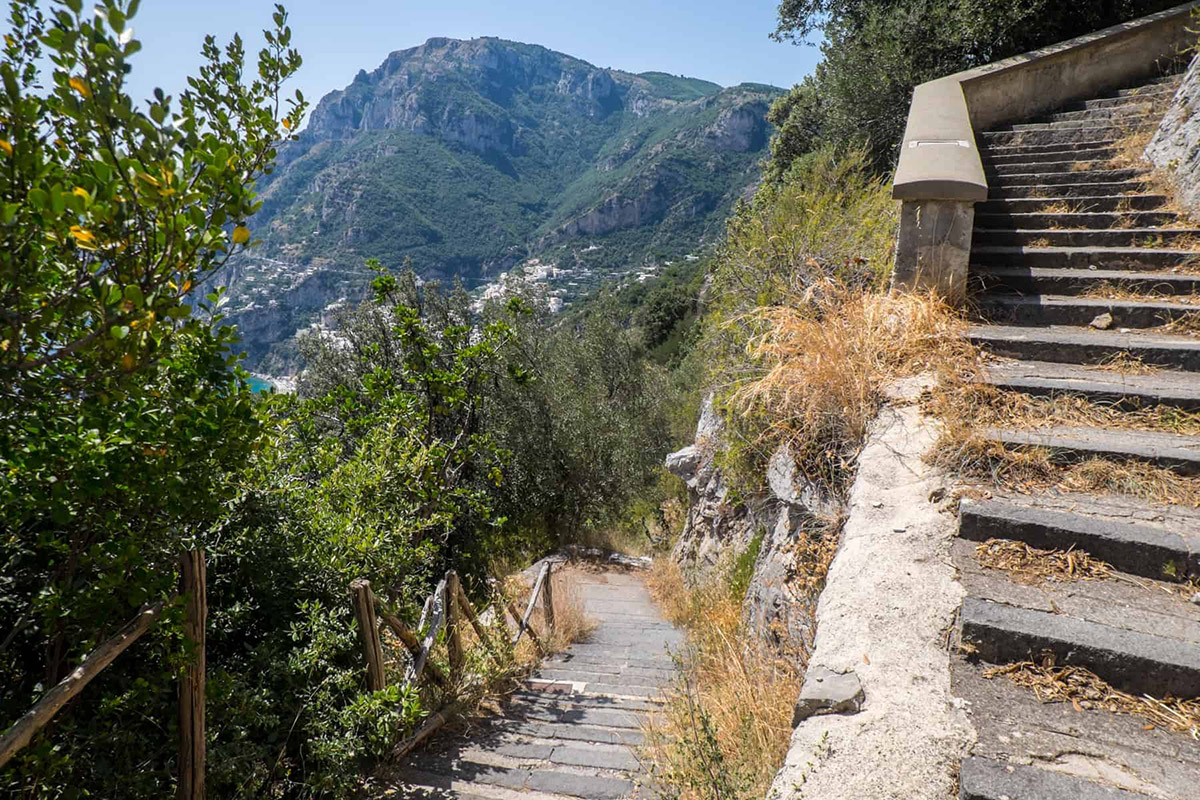 Stairs down from Nocelle. Part of the 1700 stairs.

More About The Path of the Gods

1. Where To Start The Hike? 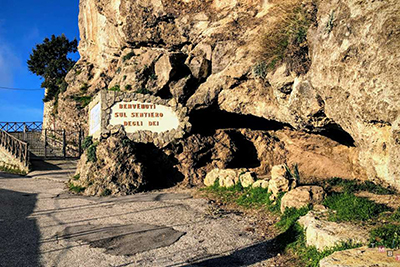 While you can hike The Path of the Gods in both directions we recommend starting in Bomerano and finishing in Nocelle as the majority of the hike is downhill.

To get to Bomerano by car, you need to get to Agerola first, so follow the directions to Costiera Amalfitana - Agerola. You will then need to find via Sentiero degli dei that dead-ends at the start of the trail. You can park along the side of the road right at the entrance to the trail.

To get to Bomerano by bus from Positano, you need to take the bus from Positano to Amalfi and change to a second bus that takes you to Agerola where you will get off in Bomerano. The bus driver will likely know the best place to get off to hike the Path of the Gods so make sure to ask!

2. Other Things To Know 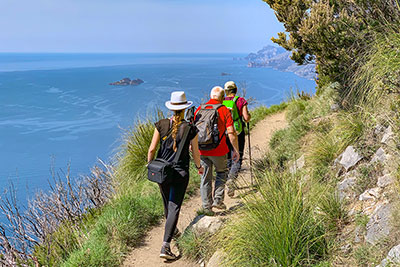 What to bring - You'll want to make sure you have enough water, food and snacks for a 3 to 5 hour hike in the sun. We also recommend sunscreen, sunglasses and a hat to make the hike more enjoyable.

What to wear - You'll want to make sure you wear a good pair of hiking shoes as there is a lot of uneven ground to traverse. Also the temperatures can change a lot from the morning to the afternoon so a light jacket for a cool morning is often a good idea.

When to hike - We recommend getting out early and doing an early morning hike starting at sunrise if you can. The cooler mornings make it much more enjoyable while hiking and you get to take in some spectacular views of sunrise from atop the amalfi coast.

Trail Markers - Make sure to keep a lookout for the trail markers. They are present frequently along the trail so if you notice that you don't see one after a while you have probably gone off course and should retrace your steps until you find one again.

3. Where To Stop Along The Path 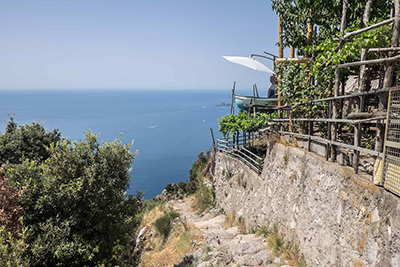 Ulisse's House, Along the Path - Along the trail you will come across Ulisse's House run by Francesco, a local who is super friendly according to Google reviews. You can stop here and buy some fresh lemonade, enjoy a fresh snack, get an espresso, and have a chat before carrying on. Bring some cash though as he doesn't take credit cards.

Sapori d’Italia, Nocelle - Once you reach Nocelle there are 3 restaurants, a general store, a B&B, Lemon Juice Hut, and Sapori d'Italia. Sapori d'Italia is basically a slushy hut out of a mini truck with some cover seating to get out of the sun. Super refreshing after finishing the hike and thinking of descending 1700 steps to continue onto Positano.

Path of the Gods in Video 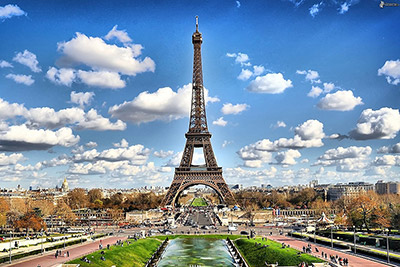 With such a vibrant, rich, fulfilling, and turbulent history, France is one of those places that you absolutely must visit. Spending time exploring its varied landscapes and beautiful sights will leave you wanting to come back for more. 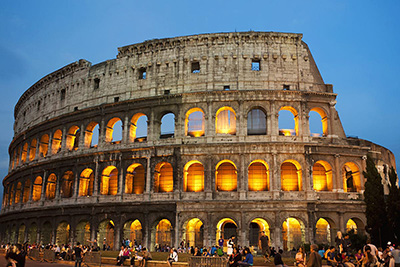 Few places have a greater hold on the imagination than Italy. Start in historical Rome and then onto the Amalfi coast, Italy's wine regions, the canals of Venice, glorious Florence, stylish Milan, and finally Mount Vesuvius & Pompeii. 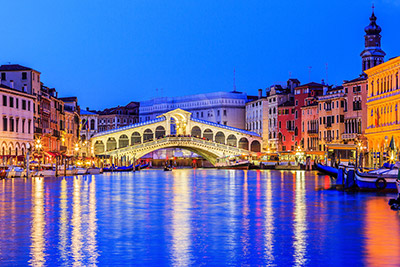 Venice consists of 117 small islands separated by a network of canals, and connected by a series of bridges. It is also one of the most visited destinations in all of Italy. Find out why in Venice Travel Guide.